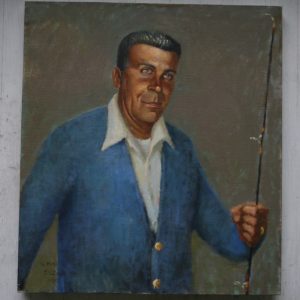 As with most of my songs, the inspiration for “Grandfathers” came from many sources. I was listening to Adam Ostrow’s TED Talk, “After Your Final Status Update” (in TED Radio Hour’s “Screen Time Part II“)while I was seeding millions of basil plants at work.  I was considering myself, and my children, and my parents, and my grandparents. All the while I was recalling the most vivid images of my grandparents I could muster–old VHS videos and Polaroid pictures, and one oil painting.

My mother’s father lives in a Polaroid
and he’s buried in a VHS.
My strongest memories of him are of those scenes—
a little more and just a little less.

Of our feet shuffling along the sidewalk
in front of his small Michigan home.
Of me leaning hard against his parked Ford
pushing with all of my boyish might.

Of him on our couch, striped denim blue
alongside a shade of working class gray,
with his arm around my five-year-old shoulder
and my knees pulled up against my chest.

He died before I turned six years old.
And all the stories he told
slowly fade.

My father’s father lives in some oil paint
that his son brushed out before I was born.
That lay for years unhung and unseen
in the attic of my parents’ house.

‘Cause in his left hand he held a fishing rod
and he wore a neat blue cardigan.
The way my father wept at The Death of a Salesman
told me much about what his dad did.

They say we all want to live
even after we die…
that in this information age
we’ll really find a way.
But, I just don’t know.

This song is pretty literal with the exception of some obvious wordplay, so I don’t feel the need to go into any convoluted decoding. Those videos and Polaroids of my mom’s dad exist. That painting of my dad’s dad is the one on the back cover of the album. The interesting thing about the lyrics is not in the varied shades of meaning, but instead in the significance of the whole and how it relates to North Light.

Adam Ostrow’s TED Talk focused on the fact that the amount of information individuals generate about themselves online is so great that it is likely that, with the aid of technology, analogues of our personalities will be able to live on into the future and communicate with our grandchildren. That is, computers will be able to simulate our responses, our thought patterns, and our behavior to such an extent that it is possible that our grandchildren will be able to come to our digital selves–after we have died–seeking life wisdom, and receive responses that closely approximate the way we would respond if we were physically alive with them.

This thought disconcerted me, and it made me think that there must be something that remains ineffable, even imperceptible, despite all of our best attempts to capture the essence of a person. I recognize that Ostrow was not claiming we could capture the essence of a person, yet it struck me that our efforts to represent anything somehow always come up short. Whether we try to capture a moment in a video or a photograph, or a person in a painting or a description, or an idea in words, or something that will never end in a memory or aspiration, we always fall short of the whole. Still, we remain motivated to try.

As a grandchild my knowledge of my grandfathers is remote, incomplete, and ultimately mythological. It is impressive to me that the majority of human existence fades away so quickly, and so completely.

Yet there remains a traceable line from parent to child through time that links the past, present, and future. Our knowledge of ourselves is incomplete at best (depending on our epistemology, it may even be nonexistent), and it would seem that our knowledge becomes even more incomplete when it comes to things of the past. Certainly few would ever claim that it is possible to know the future.

While this song remains deliberately unresolved, as we move through the album we find some hope when we let go of capturing, understanding, representing, or controlling, and instead accept the fragility and transience of all things as essential.

I recorded the guitar and voice on my cell phone. While I was recording that I had a dynamic mic set up at a distance in the room, and a decent condenser mic close range.

In retrospect it was probably a silly idea, but I wanted to have the audio quality subtly improve as you move through the track. At the beginning the song emerges from the tail end of “A New Dawning” in a tinny recollection. By the time we reach the lyric “And all the stories he told slowly fade” the clarity has improved. It reaches its highest fidelity (and most intimate sound) in the second verse. I had hoped for the changes to be very subtle, and to have the effect of increasing the intimacy and vulnerability of the song as it progressed. Only the listener can be the judge. I’ll post a video of a guitar and bass live version of “Grandfathers” that Abi and I did this summer.

Thanks again for listening and reading.

Thank you for your Support